Crude oil prices extended lower during Wednesday’s APAC trading session amid a broad ‘risk-off’ mood. Viral resurgence in some of the world’s major oil importing countries, such as India and Japan, dented the prospect for energy demand. Crude oil prices fell from five-week highs. A worsening pandemic situation in those countries underscored the fragility of a global recovery as uneven distribution and adoption of the Covid-19 vaccines posed a threat to reopening.

Risk sentiment is tilted to the cautious side as US and APAC stocks pulled back broadly and safe-haven assets such as Treasuries and gold rallied. Energy was among the worst performing S&P 500 sectors overnight, reflecting weakness in its outlook. The reflation trade is probably taking a pause, allowing investors to reassess the scope for recovery and reshuffle their portfolios towards a more balanced setting. Against this backdrop, oil prices may be put under near-term pressure.

Looking ahead, the Energy Information Administration (EIA) will report weekly inventories data later today. Markets anticipate a 3.55-million-barrel draw in America’s stockpiles after seeing a massive 5.89 million decline last week. A larger-than-expected fall may serve to underpin crude oil prices, whereas a smaller draw or rise would likely do the reverse (chart below). 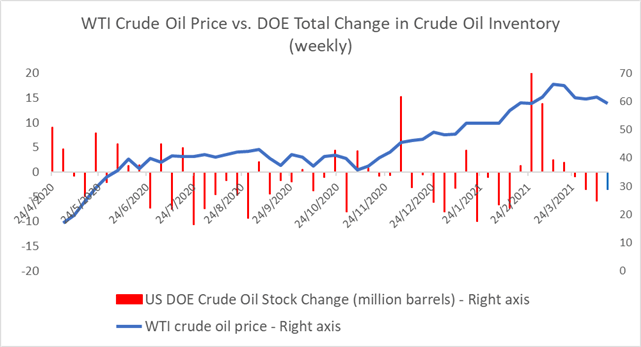 Technically, WTI appears to haveformed a “Double Top” chart pattern after hitting a strong resistance level at US$ 63.83 on the four-hour chart. A “Double Top” pattern usually occurs at the end of a bull trend and signals a trend reversal. Prices have breached below the 50% Fibonacci retracement and may be looking for support at the 38.2% retracement level (61.31).

The MACD indicator has formed a bearish crossover and trended lower since, suggesting that further consolidation may be underway.