USD/CAD trades to a fresh monthly low after failing to retrace the decline following the Bank of Canada (BoC) meeting, and the March low (1.2365) sits on the radar ahead of the Federal Reserve interest rate decision as the exchange rate searches for support.

USD/CAD carves a series of lower highs and lows as the BoC is on track to taper its quantitative easing (QE) program “effective the week of April 26,” and the bearish price sequence may persist as the Federal Open Market Committee (FOMC) is expected to retain the current course for monetary policy.

The FOMC appears to be in rush to switch gears as the majority of Fed officials see the benchmark interest rate holding near zero through 2023, and the central bank may continue to endorse a wait-and-see approach after updating the Summary of Economic Projections (SEP) at the March meeting as Vice Chair Richard Clarida insists that “policy will not tighten solely because the unemployment rate has fallen below any particular econometric estimate of its long-run natural level.”

In turn, more of the same from the FOMC may keep USD/CAD under pressure as the central bank stays on track to “increase our holdings of Treasury securities by at least $80 billion per month and of agency mortgage-backed securities by at least $40 billion per month,” and it remains to be seen if Chairman Jerome Powell and Co. will adjust the forward guidance ahead of the second half of the year as the central bank is slated to update the SEP at the June meeting.

Until then, the rebound from the March low (1.2365) may end up being a correction in the broader trend rather than a shift in market behavior as USD/CAD trades back below the 50-Day SMA (1.2568), but the tilt in retail sentiment looks poised to persist as traders have been net-long the pair since May 2020. 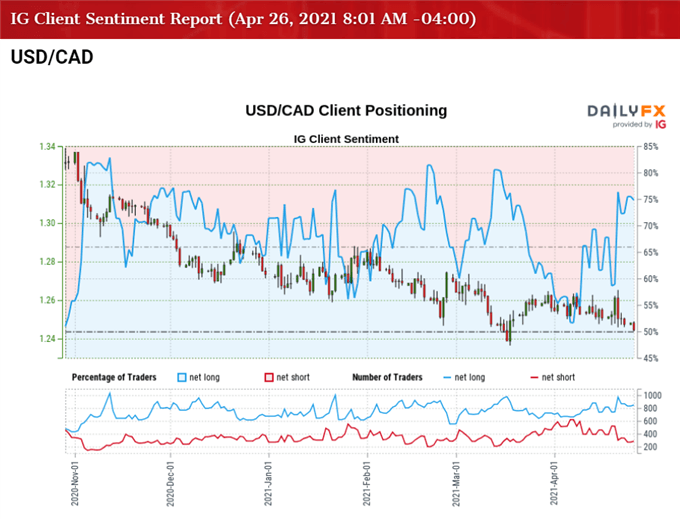 The IG Client Sentiment report shows 69.77% of traders are currently net-long USD/CAD, with the ratio of traders long to short standing at 2.31 to 1.

With that said, the rebound from the March low (1.2365) may end up being a correction in the broader trend rather than a shift in market behavior as the tilt in retail sentiment persists, and the exchange rate may continue to carve a series of lower highs and lows ahead of the Fed rate decision as searches for support.