The price of oil attempts to retrace the decline from earlier this month as US crude output contracts in April, but lack of momentum to push back above the 50-Day SMA ($60.69) may generate range bound conditions even as the Organization of the Petroleum Exporting Countries (OPEC) upgrade the outlook for global demand.

The price of oil appears to be stuck within the opening range for April even though OPEC+ plans to gradually restore production over the coming months as US production remains at pre-pandemic levels.

Recent figures from the Energy Information Administration (EIA) showed weekly field production narrowing to 10,900K from 11,100K in the week ending March 26, and a further slowdown in US output may keep oil prices afloat as OPEC Secretary GeneralMohammad Barkindo reiterates the group’s “commitment to supporting oil market stability” while speaking at an event held by the International Monetary Fund (IMF).

It remains to be seen if OPEC and its allies will continue to regulate in 2021 as the updated Month Oil Market Report (MOMR) reveals that “in 2021, world oil demand growth is expected to increase by about 6.0 mb/d y-o-y, representing an upward revision of about 0.1 mb/d from last month’s report.” 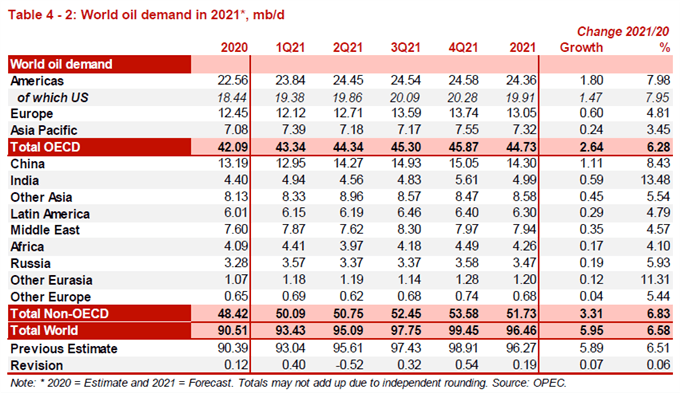 The April 2021 MOMR emphasizes that “oil demand in the 2H21 is projected to be positively impacted by a stronger economic rebound than assumed last month,” and the pickup in global activity may encourage OPEC and its allies to make further changes at the next Joint Ministerial Monitoring Committee (JMMC) meeting on April 28 as the group plans to “assess market conditions and decide on production level adjustments for the following month, with every adjustment being no more than 0.5 mb/d.”

Until then, the price of oil continue to face range bound conditions as it struggles to push back above the 50-Day SMA ($60.69), but the ongoing weakness in US crude output may keep oil prices afloat as OPEC and its allies upgrade the outlook for global demand.

With that said, the decline from the March high ($67.98) may turn out to be a correction in the broader trend rather than a change in market behavior, and the Relative Strength Index (RSI) may show the bearish momentum abating if it breaks out of the downward trend from earlier this year.

© Reuters. France stocks higher at close of trade; CAC 40 up 0.28% Investing.com – France stocks were higher after the close on Thursday, as gains in the , and sectors led shares higher. At […]