The Dow Jones has been an outstanding performer among the three US indices over the last few months as the ongoing reflation trade helps to bolster many of its constituents. The same forces that have helped drive the Dow higher have worked to cripple the high-flying technology stocks of the Nasdaq 100 and many leaders of the S&P 500. As a result, the Dow Jones is the only index among them that remains above its broader uptrend and it could help the index avoid deeper declines if volatility continues.

The trendline in question is derived from the index’s pandemic low in March 2020 and has influenced price throughout the time since. While the Nasdaq 100 and S&P 500 have since broken beneath their respective trendlines, the Dow enjoys a supplementary level of support derived from various market peaks throughout the last fifteen months. As it stands, the two trendlines converge near the 34,000 mark and will look to keep the Industrial Average afloat.

How to Short Sell a Stock When Trading Falling Markets 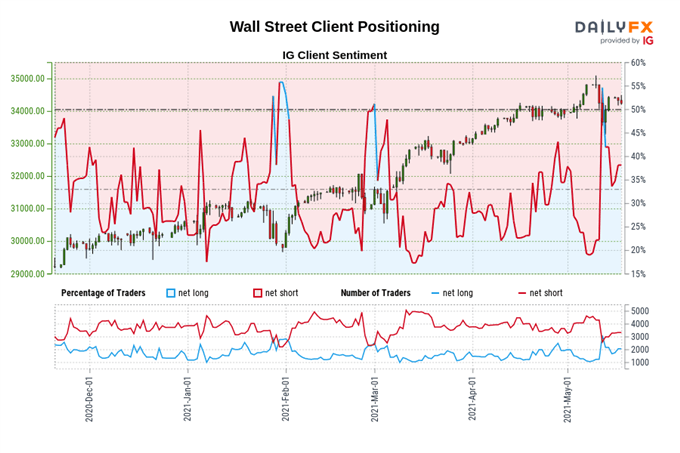 With that in mind, client positioning data may suggest the Dow is at risk. While traders remain net-short, the number of traders net-short has decreased to its lowest levels since March 2021. Since we typically take a contrarian view to crowd sentiment, a flip to net-long may suggest the index will continue to fall.

Such a shift in client positioning might also coincide with a trendline break which would effectively open the door to deeper losses for the Industrial Average. Until such a break occurs, however, convergent support near 34,000 will remain the “line in the sand” for the index. In the meantime, follow @PeterHanksFX on Twitter for updates and analysis.