It has been a relatively quiet week for BTC/USD as price action continues to trade within a well-defined range. Meanwhile Ether and Doge have maintained their bullish trajectory despite potential indications that the strong upward momentum may be losing steam.

The analysis contained in article relies on price action and technical analysis. To learn more check out our DailyFX Education section.

Although it’s difficult to predict if the cryptocurrency sphere is still poised for further gains, both crowd psychology and speculation interests remain the primary drivers of the short-term move.

With that being said, Tesla CEO and Founder of SpaceX, Elon Musk, is expected to appear on this week’s Saturday Night Live (SNL) show, which may actually constitute as a major risk event. For those who may recall, it was Musk that played a critical role in both the Bitcoin and Dogecoin rally earlier in the year, which also spoke to the adoption of digital currency as a method of payment by mainstream investors.

With the release of what appeared to be dismal NFP results earlier today, Bitcoin bulls were able to retest February highs, driving prices back above the 50-period SMA which has recently held as additional support. After retracing from fresh all-time highs last months, a MACD crossover below the zero line indicates that a boost in sentiment may be what the bulls need to restore hope of further gains.

With the 14.4% Fibonacci retracement levels from both the major and February 2021 moves holding both bulls and bears at bay, a break through critical resistance at the key psychological level of $60k could potentially provide bulls with another opportunity to test record highs.

After eight consecutive months of gains ETH/USD achieved a fresh all-time high in Thursday’s session, at the key psychological level of $3,600, now holding as resistance. With prices trading well above both the 20 and 50 period Moving Average, the MACD remains in overbought territory, reflecting the optimistic sentiment. Currently, the trend remains in favor of the bulls but the formation of Doji candles, suggestive of indecision, may provide bears the opportunity to drive prices back towards the $3,000 mark. 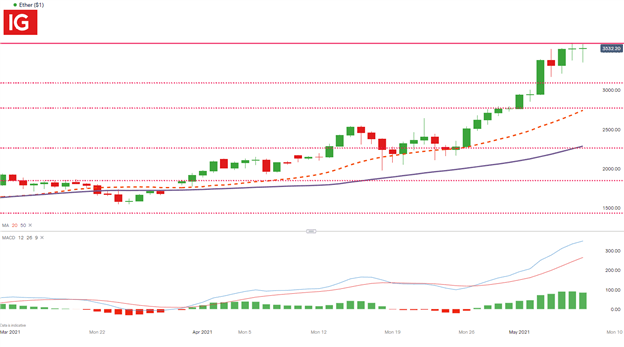