I will admit: head-and-shoulders patterns are one of my favorite technical patterns to find in the markets. Once you know the structure of the chart configuration, it can seem they occur with remarkable frequency in ‘nature’. Given the foundation of a head-and-shoulders (H&S) is congestion with a flat support (or resistance for an inverse example) and deteriorating high for resistance, this in fact does happen very often. That said, the simple existence of these formations does not dictate the likelihood of a big reversal as technical textbooks would insinuate.

One of the key aspects of a H&S that I look for in order to establish potential and relevance is the significance of a prevailing trend into the congestion. Typically, this technical pattern is one associated to reversals. A high, higher high and lower high suggests failing strength in bullish conviction. That can speak to a simple period of consolidation or the potential of a full reversal. Dictating a turn or continuation should come with the break of either a ‘neckline’ (in a turn) or previous high (in continuation). Yet, in a reversal, projections depend in part on the retracement of the preceding move. In short, if there is no trend to reverse; the potential of the move is likely to be reserved.

To give an example of a H&S that is more likely to struggle with its turn versus one that is better staged, AUDUSD happens to offer up both but on different time frames. First, on the daily chart, we find the structure of a head-and-shoulders developed over the past month. The ‘left shoulder’ formed in the late April highs, ‘head’ was the 0.79 high at the beginning of May and subsequent ‘right shoulder’ was the lower highs around 0.7800 this past week. The ‘neckline’ which is support is roughly 0.7700. The pattern is there, however, how much stored energy is there should we establish a reversal? To confirm a break below 0.7700, we will first have some ‘slippage’ to our entry point – as you don’t want to get in before confirming it is an actual break. Then to project how far it could run before hitting the next meaningful support, we have an heavier floor down near 0.7575. That isn’t a very large window, and I do not attempt to go for full ranges as it lowers the probability of success. There just isn’t a lot of run for this pattern. 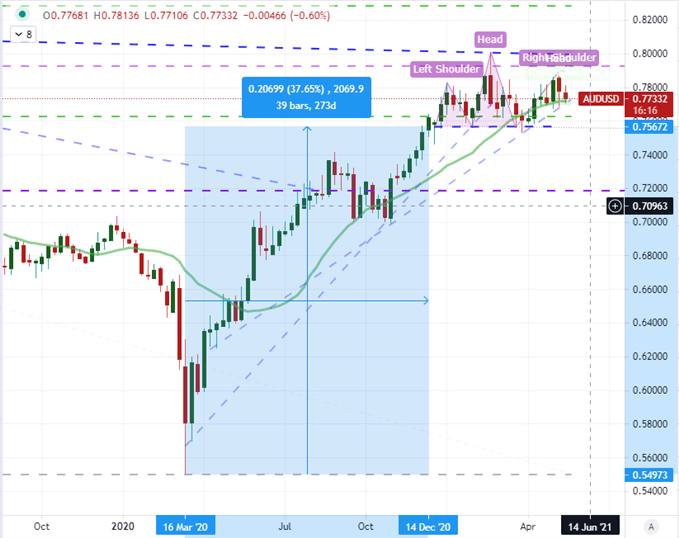 If, on the other hand, you pull back for more historical price action or turned the periodicity to a weekly chart, the picture changes. There is a larger head and shoulders pattern that has formed throughout 2021, with the left shoulder at the start of the year, a head that is established as the peak in late February and right shoulder as the same 0.79 high in April mentioned above. The neckline is that 0.7575 heavier support also mentioned above. The trend leading into this congestion pattern is a massive 2,000 pip run up to the neckline starting from the swing low back with the post-pandemic March 2020 bottom. Of course, given that this pattern is developed over the weekly chart, it would reasonably be expected to take longer to play out – some weeks. And, just because the pattern exists doesn’t mean it needs to play out as a reversal. The break below the ‘neckline’ is still an important qualification – as is the motivation for the move which will help further follow through.