We look to celebrities for lots of things: Which vitamins will give me lustrous hair, how to apologize and sound like you mean it, and how to make sex tapes for fun and profit. But should we be looking to them for the next big investment idea?

But there’s a new way to demonstrate cache, and that’s the celebrity-backed SPAC.

Special-purpose acquisition companies, colloquially known as SPACs, have a name that sounds similar to the noise your cat, Lord Meowington, makes before he hurls up a hairball. SPACs have been around since the ‘90s, but investors didn’t want to step into these obscure market instruments in the old days. Then came the roaring 2020s, and that all changed.

Investors are rushing to snap up stock in SPACs, which are shell corporations listed on stock exchanges. SPACs exist to buy a private business and take it public. In essence, SPACs provide a route to funding that’s like an initial public offering (IPO) but without all the time, expense and regulatory oversight.

The sponsors of a SPAC typically have two years to identify an acquisition target or they must return their investors’ money. Is there a SPAC for relationships? I’ve put two years into this and nothing fruitful has come of it, so I would like all of the money back—as well as my youth. Anyway, over the last few years, SPACs have taken off with notable success stories like DraftKings (DKNG) and Virgin Galactic (SPCE).

“Yet with more than nine months to go until the end of 2021, initial public offerings of U.S. SPACs this week surpassed the $83.4 billion the sector raised in all of 2020, data from industry tracker SPAC Research showed,” a Reuters article said. So what happens when Shaquille O’Neal, Steph Curry, Serena Williams, Alex Rodriguez and Ciara walk into a bar and want to put their name on a SPAC?

Barry Ritholtz, chairman and chief investment officer of Ritholtz Wealth Management, puts it this way: “I imagine that some business manager somewhere says to them, ‘Hey, listen, there’s this hot new financial offering. Let’s put your name and celebrity on it,’” Ritholtz said. “‘You’re going to bring some fairy dust to a SPAC, and the potential upside is tens if not hundreds of millions of dollars.’”

SPAC celebs are like the foxy booth babes sprawled across the hood of a car at an auto show, attracting attention and suggesting the car radiates sex appeal. Ask them about torque, and you’ll probably get a blank stare. A-Rod could probably field a question about EBITDA, but is his imprimatur really a good reason to buy a certain SPAC stock?

“Invest because the trade fits the mechanics and your appetite for risk, not because a seven-foot-tall dude who also sells pepperoni pizza told you to.”

For any celeb who “won’t get out of bed for less than 10 grand,” SPACs have a ton of potential upside. Kurutz, of The Times, lays out the potential payday this way: “Hypothetically, let’s say a SPAC prices at $10 a share and raises $500 million in the public markets. If a celebrity adviser had negotiated 1% of that deal, they are rewarded with a stake in the company worth $5 million.”

But say the SPAC finds a successful merger candidate, brings in other investors, and a deal is done at $10 billion. The celebrity’s 1% stake has netted, on paper, a $100 million payday, Kurutz wrote. OK, that’s better than shaking what your mama gave you in a hip-hop video like Ciara, a singer who has attached her name to a SPAC. Also, at least this way she can still eat carbs.

So far this sounds like a no-brainer for entertainers and athletes, but how are investors supposed to navigate this inscrutable maze of financial instruments, especially when it seemingly empties out into the “gift shop” of putting more money into famous people’s pockets? The Securities and Exchange Commission (SEC) took to their Twitter account to post a scathing reprimand.

“Celebrity involvement in a SPAC does not mean that the investment in a particular SPAC or SPACs generally is appropriate for all investors,” the notice from the SEC, posted in March read, “Celebrities, like anyone else, can be lured into participating in a risky investment or may be better able to sustain the risk of loss.”

But the SEC doesn’t stop there. “It is never a good idea to invest in a SPAC just because someone famous sponsors or invests in it or says it is a good investment,” the agency said. That makes it seem like celebrities are deceptively dressed old women in a Grimm’s fairy tale trying to lure you and your fat brother into her cottage so she can cook you. 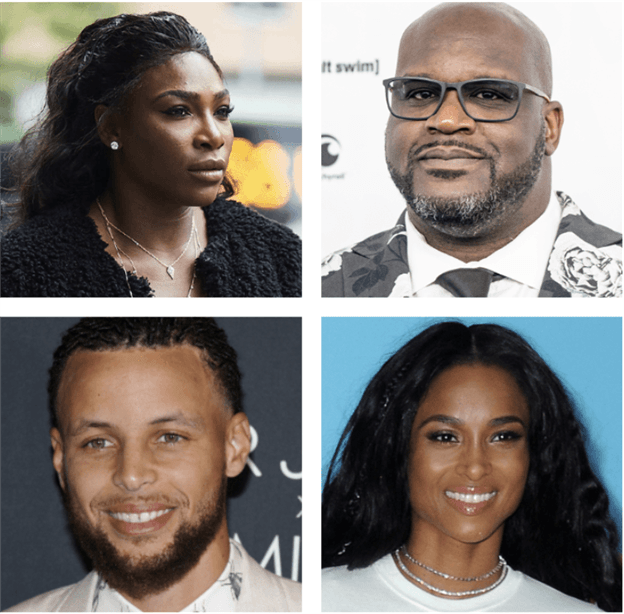 Jim Cramer, host of CNBC’s Mad Money, has said that SPACs are “gimmicky” and “have jumped the shark,” but don’t underestimate the clout of celebrities in a crowded field.

“With more SPACs on the market, there is more competition for investor dollars and for attractive merger targets,” according to a Barron’s article. “SPAC offs,” where private companies meet with several SPACs in succession and choose one as a merger partner, have become common. “In some cases, having a celebrity on your side might just clinch a deal,” the Barron’s story said.

In his blog and YouTube series, Brian DeChesare offers his take on the threat he believes SPACs pose to passive investors. “For sponsors, SPACs are like call options with payoffs even if the company’s share price falls significantly,” he said. “In other words, you assume the full downside risk when you buy into a SPAC, while the sponsor loses nothing unless the share price falls by more than 90%.”

DeChesare’s not wrong. The track record for SPACs has been mixed. “SPACs launched in 2019 and 2020 have mean returns of negative 12.3% and negative 34.9% over six and 12 months, respectively, following merger announcements,” he wrote.

As much as you may love the Shaq-turned-genie movie Kazaam, the big guy isn’t going to grant your portfolio three magical wishes. “For investors, it’s important not to be dazzled by celebrity star power,” Barron’s cautioned. “Investors are better off focusing on SPACs from sponsors with strong track records from previous ventures, major institutional backing and compensation aligned with investors.”

“Management and board members should have a background that suits the SPAC’s target industry,” Barron’s continued. “A current or retired CEO with operational experience is most valuable of all.”

From 2015 to 2019, SPACs led by individuals with C-suite experience outperformed SPACs without such managers by about 40% in the year after their mergers, according to a study the McKinsey consulting firm published in late September.

Sure, the red tape of a traditional IPO is arduous and complicated, but investors get the priceless gift of transparency. IPOs typically take six to 12 months, while the process of a “reverse merger” with a SPAC may only require three to five months. But just because you can get Botox injections at your dentist doesn’t mean you should.

“The flip side of making things easier for companies is, inevitably, that the risk of fraud to investors goes up. I don’t know any way to square that circle,” said Usha Rodrigues, a professor at the University of Georgia School of Law.

Fill in the blank check

Luckbox loves liquid underlyings with great volatility. SPACs have provided wonderful trading opportunities as money flows out of stodgier stalwarts like Apple (AAPL) and Microsoft (MSFT), but let us not be led into temptation by empty shells shilling—well, empty shells. Invest because the trade fits the mechanics and your appetite for risk, not because a seven-foot-tall dude who also sells pepperoni pizza told you to.

Vonetta Logan, a writer and comedian, appears daily on the tastytrade network and hosts the series Rolling Trades on YouTube. @vonettalogan