Over the past decade Tesla CEO and SpaceX founder Elon Musk has become a global icon of industry disruption. As Musk tests the technological boundaries, his radical ideas combined with his desire to change the world have secured him a spot as one of the most well-known social influencers who regularly exhibits how impactful social media and crowd psychology can be for global markets.

To learn more about crowd psychology, check out DailyFX Education

Social media platforms have not only revolutionized the way in which people communicate and absorb information, they also allow entrepreneurs, individuals and corporations to network and share information in a timely manner. Platforms have their unique designs and objectives with certain features offered. Elon Musk has chosen to use Twitter as his preferred platform. With over 50 million twitter followers and a growing brand, it comes as no surprise that when the billionaire expresses his opinion on the social platform, people listen and react and so do markets.

For those who don’t recall, Elon Musk’s tweets played a major role in fueling the recent cryptocurrency rally after a number of key market participants followed Musk in adopting Bitcoin as an alternative method of payment, while also adding $1.5 Billion in the cryptocurrency to Tesla’s balance sheet. Likewise, it was another one of Musk’s optimistic tweets that sparked a rapid surge in the demand for Dogecoin, allowing the meme-based cryptocurrency to surge approximately 500% in a week. 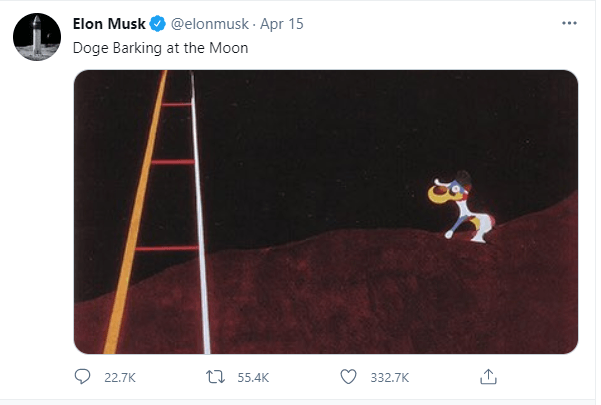 With over 300,000 likes and 55,000 retweets, Dogecoin prices soared, demonstrating the enormous impact influencers like Elon Musk have on financial markets.

GUIDE|TOST|Discover the importance of risk management

Although nobody can predict which market Elon Musk may tweet about next, crowd psychology currently places a large amount of emphasis on Elon Musk tweets. His social media actions are unpredictable, and serve as a poignant reminder of the importance of incorporating risk management into a trading strategy to help address what is unpredictable.