Crude oil prices dropped by the most since September 2020 on Monday after the Organization of Petroleum Exporting Countries and its allies, known as OPEC+, reached a deal that will see the group’s production increase by 400,000 barrels a day for the next fourteen months. That will see production return to pre-Covid levels in the second half of 2022. The group’s forecast sees a demand-side recovery by the end of next year.

The newly established deal saw concessions on quota calculations for the U.A.E. as well as Russia and Saudi Arabia, among others. The rework to baseline levels that cuts were initially calculated from will allow the respective countries to release more oil into global markets while keeping a supply deficit intact. However, the drop in prices on Monday was not the desired effect OPEC likely had in mind, leaving the possibility for a rollback should ailing prices persist.

In fact, the fundamental picture is degrading on the back of rising Covid cases across key economies, driven by the Delta variant. Australia has several large metro areas, including Sydney, under lockdown. Low vaccination rates across Asia leave policymakers with almost no choice but to enact economically crippling lockdowns. The longer these go on for, the bigger the hit to economic activity, which roughly translates to reduced oil consumption.

Elsewhere, anti-fiat gold struggled to gain much upside momentum despite broad-based risk aversion. Treasury yields dropped, with the 10-year note’s rate falling to its lowest level since early February. Lower yields are normally a tailwind for gold prices. However, a stronger US Dollar more than likely offset some strength. The yellow metal may become more attractive in the near term if government bond yields remain under pressure, particularly if the recent market volatility and Covid surge cause the Federal Reserve’s reorient their policy outlook.

Crude oil began the week by smashing through its 50-day Simple Moving Average (SMA) and the 70 psychological level. A rising support channel from the March swing low appears to have helped the energy asset’s free fall and may continue to guide prices higher. A drop lower would likely open the door for more losses, with a prior level of resistance turned support at 61.56 being a possible bear target. MACD dropped below its center line, a bearish signal.

Gold prices are trading at a level of support turned resistance between the falling 200-day Simple Moving Average (SMA) and the psychologically imposing 1,800 level. MACD and RSI are both pointing higher, along with the 26-day Exponential Moving Average, which also appears to be providing support to prices over the past week. A solid break above the 200-day SMA may see a leg higher form. On the other hand, dropping below 1,800 could open the door for an extended drop. 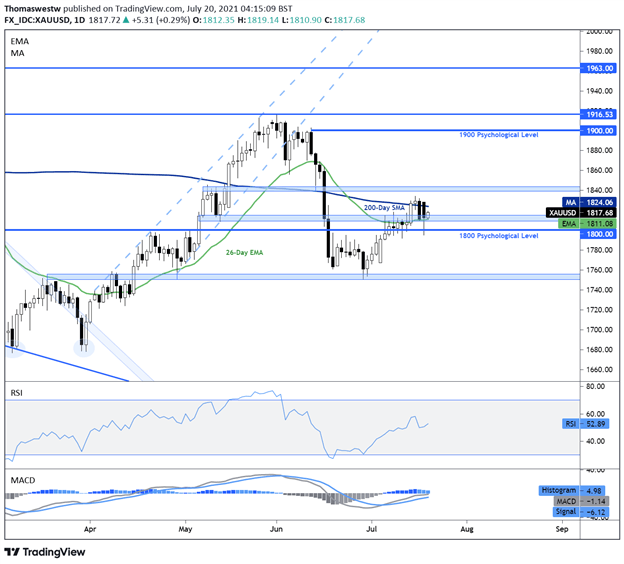 USD/MXN Forecast: Neutral USD/MXN continues to build on its recent bearish momentum coming back into a strong support area between 19.87 and 19.67 where sellers are really going to have to battle it out to […]