The Japanese Yen rose in the wake of June’s momentous FOMC meeting, where policymakers said that price growth had surpassed their expectations and shifted up the timeline for on-coming interest rate hikes. Having previously seen rates flat through 2023, the central bank has now penciled in two hikes that year.

The priced-in market view implied in Fed Funds futures following the announcement is more aggressive still, envisioning one hike in 2022 and two more in the following year. That probably echoes subsequently hawkish comments from officials including the presidents of the St Louis, Boston and Dallas Fed branches.

Japanese yields rose in tandem with those in the US in response, reflecting the ubiquity of the US Dollar as the go-to medium of exchange global trade. Close to 80% of global monetary transactions are settled in USD. So, a rise in the cost of borrowing the Greenback typically translates into higher credit costs globally.

As it happens, the process that the Fed is slowly initiating finds most global policy rates having converged on Japan – that is, toward zero and sometimes beyond it, into negative territory – amid the onset of the Covid-19 pandemic. Recovering from these depths in most places is expected to come alongside reflation.

Japan is a familiar exception. Here, structural forces holding down prices for the better part of 30 years and inspiring an epic (and mostly fruitless) BOJ counteroffensive remain in play. What this means is that real interest rates – that is, nominal yields discounted by the expected rate of inflation – are higher in Japan than most of the G10.

Since most nominal rates have converged near zero, the size of the inflation haircut has become pivotal. That is inherently small in Japan relative to global counterparts, so the inflation-adjusted yield to be had on JPY-denominated holdings emerged as more attractive.

The BOJ policy of capping 10-year yields at 0% is an obvious headwind here, but it seems fragile. The central bank already owns almost half of Japan’s bond issuance to sustain it. Scope to do more seems limited, lest the monetary authority and the government itself be accused of outright debt monetization, an international taboo.

Of the major currencies, the Yen’s most pronounced advantage in this sense seems to be against the British Pound. As inflation fears push the Fed moves to pressure nominal rates upward globally, Japan’s real-yield advantage seems likely to expand further.

On the technical front, GBP/JPY may be forming a double top at resistance near the January 2018 high. Prices broke seven-month trend line support and negative RSI divergence warns of ebbing upside momentum. Pushing past support at 151.32 may expose the 148-149 zone. A further break below that might also pierce the uptrend from March 2020. 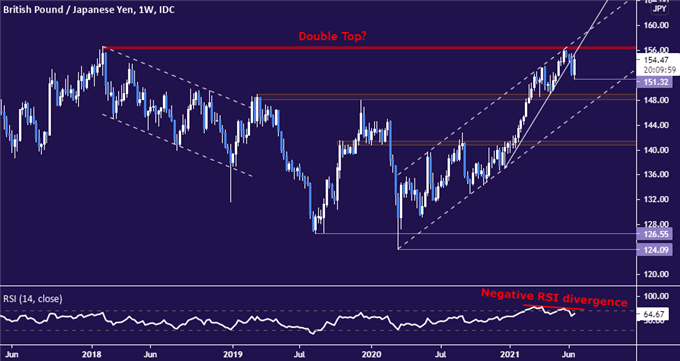