USD/CAD attempts to retrace the decline following Canada’sEmployment report as it struggles to extend the series of lower highs and lows from the monthly high (1.2590), but the exchange rate may face range bound conditions ahead of the Bank of Canada (BoC) interest rate decision as the central bank is slated to update its quarterly Monetary Policy Report (MPR).

USD/CAD seems to be staging another attempt to test the 200-Day SMA (1.2642) on the back of US Dollar strength, and the BoC rate decision may do little to curb the advance from earlier this month as the central bank is expected to retain the current course for monetary policy.

It remains to be seen if the BoC will respond to 230.7K rise in Canada employment as the participation rate widens to 65.2% from 64.6% in May to reflect discouraged workers returning to the labor force, and signs of a more robust recovery may encourage Governor Tiff Macklem and Co. to make further adjustments in 2021 as the central bank expects to achieve the 2% target for inflation on a sustainable basis “sometime in the second half of 2022.”

As a result, the BoC may draw up an exit strategy after tapering its quantitative easing (QE) program in April, and the updated MPR may spark a bullish reaction in the Canadian Dollar if the central bank shows a greater willingness to normalize monetary policy over the coming months.

Until then, USD/CAD may consolidate as it struggles to extend the series of lower highs and lows from the monthly high (1.2590), but the tilt in retail sentiment persists as traders have been net-long the pair since May 2020. 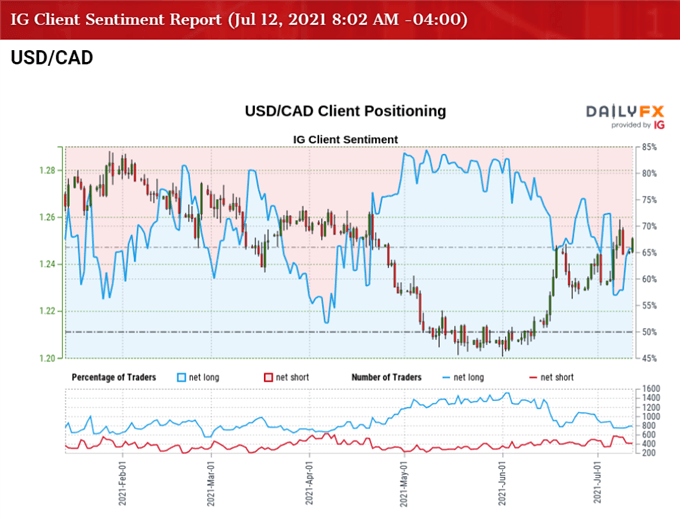 The IG Client Sentiment report shows 66.79% of traders are currently net-long USD/CAD, with the ratio of traders long to short standing at 2.01 to 1.

The number of traders net-long is 13.84% higher than yesterday and 5.73% lower from last week, while the number of traders net-short is 9.22% higher than yesterday and 8.70% higher from last week. The decline in net-long position comes as the advance from earlier this month failed to spur a test of the 200-Day SMA (1.2642), while the rise in net-short position has done little to alleviate the crowding behavior as 66.53% of traders were net-long at the start of July.

With that said, the rebound from the yearly low (1.2007) may turn out to be a correction in the broader trend rather thana change in USD/CAD behavior amid the ongoing tilt in retail sentiment, and the BoC rate decision may fuel the decline from the monthly high (1.2590) if the central bank takes additional steps to normalize monetary policy.