Wall Street’s earnings season gets underway this week, signaling the beginning of an extremely busy period for market participants. Major US banks are slated to lead the procession, with JP Morgan and Goldman Sachs reporting on Tuesday along with Pepsi. Equity markets have gyrated recently as fears have emerged over a global slowdown growth. This sentiment was further echoed last week when China announced its intentions to support the domestic economy through additional easing of monetary policy. Fears over a global slowdown and new COVID variants may be eased by a strong earnings period, allowing markets to sustain momentum at/near all-time highs.

With the S&P 500 trading at all-time highs, experts are forecasting a record earnings period for the index’s constituents. With 18 members of the S&P 500 having already reported, 15 posted a positive earnings surprise. Earnings growth is expected to be the highest since Q4 2009, when equities were recovering from the Great Financial Crisis. According to FactSet estimates, S&P 500 earnings growth year over year is expected to be 64%. In Q1 of 2021, S&P 500 earnings growth was projected to be 23.7% YoY. The actual data blew estimates away at 52.5%, more than twice the FactSet estimate. According to additional FactSet metrics, actual earnings have exceeded estimates by 19.7% on average over the last four fiscal quarters (Q2 2020 through Q1 2021)

While results will matter to market participants, perhaps more important will be the guidance offered for the rest of the year and beyond. The recent move lower in longer-dated yields has dominated headlines of late, and will certainly be addressed by the major banks as they discuss net interest margin (NIM) and other key metrics. Banks, who benefitted from a surge in yields early in 2021, will certainly set a benchmark for the entire earnings period with their results this week. But commentary on the state of the global economy may potentially justify recent worries over slower growth and the market gyrations that have occurred as a result.

The aforementioned cool-off in rates has thrust growth stocks back into the limelight, as market participants juggle whether to be long cyclical or growth stocks. Concerns over global growth and the transitory nature of inflation has seen yields retreat from yearly highs. Continued downward pressure on yields has seen the Nasdaq 100 once again outperform the Dow Jones (growth over value), a trend that dominated US equity markets throughout 2020. However strong earnings may potentially ease fears over any “impending” economic slowdown, potentially reversing the recent move lower in yields and once again pushing cyclical stocks to outperform. 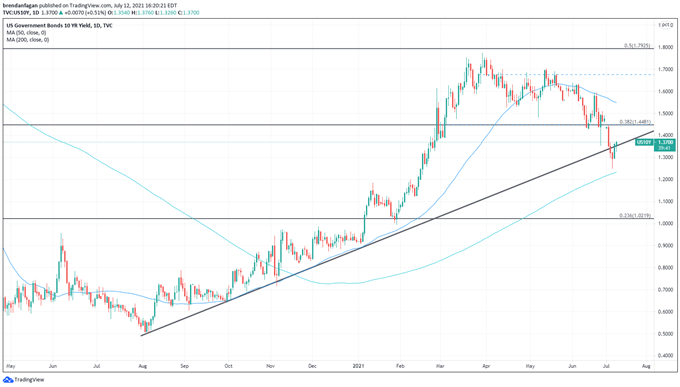 While earnings will no doubt dominate the headlines, market participants will have plenty of risk events to trade and follow during the week of July 12th. Key inflation metrics will be released on Tuesday and June retail sales data will cross the wires on Friday. Additionally, Federal Reserve Chair Jerome Powell is slated to testify in front of Congress on Wednesday and Thursday. Powell’s comments on the economic recovery and the state of monetary policy will be of particular importance, and may provide direction for major US indices in the near-term.